ZEE TALKIES REACHED A CRESCENDO WITH ITS FINALE EVENT ON 18th NOVEMBER, AT THE BALEWADI STADIUM, PUNE! 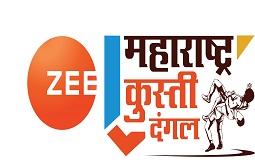 The only thing certain in sports is uncertainty. The entire state of Maharashtra and the nation experienced the same on the grand finale of Zee Maharashtra Kusti Dangal on Sunday evening. Kusti fever reached its zenith as fans thronged the Balewadi stadium and stay glued to their television sets and smart phones for the final match between Puneri Ustad & Yashwant Satara!

Puneri Ustad finally broke the winning chain of Yashwant Satara and proved themselves as the Champions of ZMKD. Puneri Ustad, a team owned by Shantaram Manave and Paritosh Painter won the prestigious trophy as well as 50 lacs. The magnificent finale of ZMKD was witnessed by eminent personalities across all fields. Viewers enjoyed these matches live only on Zee Talkies, Zee Marathi, Zee Anmol and digitally through the medium of Zee5 app.

It has been a crazy few weeks, with exhilarating matches keeping fans entertained with world-class performances… leading up to the Mega final of ZMKD, which was graced by the presence of Shri Sharad Pawar (Head, Maharashtra Kusti Parishad), Shri Subhash Chandra (Chairman, Essel Group), Supriya Sule, Arjunveer Kakasaheb Pawar and Balasaheb Landge.

Puneri Ustad broke Yashwant Satara’s winning streak at the Mega Finale. The team, which had had been winning so far in the race, lost at the finale. Just like the folk tale of hare and tortoise, Puneri Ustads played slowly yet steadily, and won the Championship.

This pilot season of Zee Maharashtra Kusti Dangal has had its fair share of tears, sweat, blood, falling down, rising up, failures & victories. And through all this, what stands out and truly comes to life is the never-say-die attitude of the spirited players, that has been sharply chiseled with this tough sport!

We have seen players bounce back from severe injuries, team owners finding sweet victory after many losses – patiently waiting for their moment in the sun. International players and CommonWealth Medalists have displayed a great show of excellence and sportsmanship, winning not just matches but the audiences’ hearts too!

The magnitude of this platform meant that it needed massive support for it to reach the stature it has gained. And that is exactly what Zee Maharashtra Kusti Dangal got! Right from the team owners, who were thrilled to set new precedents with their respective teams, to the brands who wholeheartedly supported and gave the tournament the shot in the arm it needed. There was just the right amount of celebrities & dignitaries who drew attention to India’s most loved and most dated sport – Kusti!

The winners, they were awarded with 50 lacs Prize Money, while 2nd runner up Yashwant Satara won 30 lacs and 3rd runner up Vidarbhache Wagh won 20 lacs. Along with this, Shri Sharad Pawar announced more than a couple of scholarships for the upcoming talents. He also assured the audiences that the scale of this initiative called Zee Maharashtra Kusti Dangal, will be much bigger next year.

“On behalf of Kustigir Parishad, I would like to thank each one of you present here for giving this initiative such a massive response. I believe ZMKD shall encourage more youth to embrace Kusti. These upcoming stars shall bring laurels to the state as well as for the nation. I would like to congratulate Zee Talkies, Mr. Subhash Chandra and the entire Zee group for accomplishing such a great initiative in order to revive our traditional sport.”, said Sharad Pawar, Head of Maharashtra Kustigir Parishad.

He also went on to announce the following scholarships:

* On behalf of Mr. Subhash Chandra’s social organization, 3 deserving boys and 1 deserving girl shall be given a scholarship of Rs. 50,000 per month for the next 2 years.

* On behalf of Kustigir Parishad members, 3 deserving boys and 1 deserving girl shall be given a scholarship of Rs. 50,000 per month for the next 2 years.

* Rahul Aware, Utkarsh Kale, Kiran Bhagat and Abhijeet Katke would be given a scholarship of Rs. 1,00,000 per month for the next 2 years on behalf of Supriya Sule and Yash Pawar.

The Tournament had just the right amount of enthusiasm – at various levels. The anchors and their non-stop excitement for the games, every night for 2 weeks, kept the momentum going. And of course, the most spectacular display of crowds at the stadium, told us that Kusti has got back its old charm, going beyond the television sets and smart phones too. The tightly packed and smartly packaged distribution for Zee Maharashtra Kusti Dangal, thanks to Absolute Broadcast, showed us that India has space in their hearts for sports like Kusti, and not just cricket, football or even Kabbadi!

The media generously showered attention to ZMKD, following the matches feverishly since 2nd November. And with the generous scholarships and massive spotlight on Kusti, it is only bound to grow leaps and bounds from this moment on.

For those who missed witnessing these moments LIVE, do catch the tournament highlights on the Zee5 App.