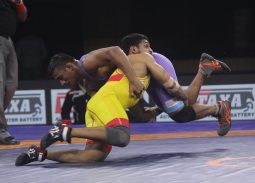 15th Nov 2018, Pune : Yashwant Satara team seems to be the unstoppable winning express at Zee Maharashtra Kusti Dangal. This team owned by Mr. Purushottam Jadhav, with their invincible players has so far maintained to be on the top of score chart always. Yashwant Satara wins their 10th match against Veer Marathwada by 4-2 on Thursday. Zee Maharashtra Kusti Dangal shall continue till 18th November 2018 at Pune’s Shree Shiv Chhatrapati Kridapeeth also known as Mahalunge-Balewadi Stadium with total six teams competing with each other. Kusti-fans can watch all these matches live only on Zee Talkies channel and digitally through the medium of Zee5 app.

In the first match, Kolhapuri Mavale again lost against Vidarbhache Wagh by 2-4. Only Ajit Shelke and Dnyaneshwar Jamdade could win in their respective bouts. However, the comeback and victory of Kolhapuri Mavale Captain Dnyaneshwar aka Mauli was well received with pomp and joy. Vijay Patil, Sonaba Gongane, Sonali Todkar and Margaryan Walter were the winners from winning team of Vidarbhache Wagh. While the second match, was again won by Yashwant Satara. Anshu Malik, Suraj Kokate, Jaydeep Gaikwad, Utkarsh Kale and Bala Rafiq Shaikh were the winners from team Yashwant Satara. This was the consecutive 10th victory for Yashwant Satara Captain Utkarsh Kale. Eventually, the bout between Rakesh Tambolkar and Akshay Chorge from 74 weight category was awarded as the Fantastic Fight of the day.

Supriya Sule, Rahul Deshpande, Bhushan Pradhan, Gauri Nalawade, Ravi Jadhav, Sameer Dharmadhikari were the celebrity guests at ZMKD on Thursday who were supporting their respective favorite teams. For all Kusti lovers who wish to watch the matches in the stadium can buy tickets online via paytm and insider.in along with the counters at the venue.

Son of a stonemason bringing laurels to the nation

Sonaba Gongane, wrestler who won 7th position at the World Championship is currently playing his best at Zee Maharashtra Kusti Dangal. This player from Vidarbhache Wagh team won by technical fall on Thursday. Hence Sonaba was declared as the Player of the match. The wrestler who has brought laurels to the country comes from hand to mouth earning type of a background. Sonaba’s father is a stonemason while mother works for other’s farm. Thus, without much of a financial support from family, Sonaba has come this long. Infact due to financial crunch, he had to take a break from wrestling in between 2009-12. However, at that point of crucial time, Ranjeet Nalawade brought him back in wrestling. Sonaba started getting training under Kakasaheb Pawar in pune with the help of Ranjeet. And the rest is history. Today Sonaba is one of the strongest players and new-found gem at ZMKD.