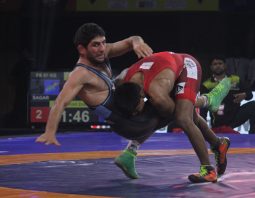 Day full of neck to neck wrestling competition at ZMKD

13th Nov 2018, Pune : After twelve succesful days, the level of competition at Zee Maharashtra Kusti Dangal has rise to the top. After neck to neck competition, both the matches on Tuesday turned out into a tie with each teams winning 3 bouts each. This form of thrilling wrestling mania shall continue till 18th November 2018 at Pune’s Shree Shiv Chhatrapati Kridapeeth also known as Mahalunge-Balewadi Stadium with six teams across the state competing with each other. Viewers can see all these matches live only on Zee Talkies channel and digitally through the medium of Zee5 app.
In the first match, there was a tie between Vidarbhache Wagh (won 3 bouts) and Mumbai Shastra(won 3 bouts). Kumar Shelar, Vijay Patil, Sonaba Gongane from Vidarbhache Wagh and Rajendra Sool, Lalita Sherawat, Atul Patil from Mumbai Shastra were the winners from their respective bouts. While even the second match was a tie between Puneri Ustad(won 3 bouts) and Veer Marathwada(won 3 bouts). Herein, from Saurabh Patil, Vinod Kumar, Vijay Chaudhary from Puneri Ustad and Shubham Thorat, Swati Shinde, Datta Narale from Veer Marathwada were the winners from their respective bouts. Eventually, the bout between Vishranti Patil and Swati Shinde was awarded as the Fantastic Fight of the day.
The superbly famous Kothare family from Marathi industry consisting of Mahesh Kothare, Adinath-Urmila Kothare came and brighten up the atmosphere at ZNMD on Tuesday evening. Also, Jui Gadkari and Vikas Patil came in to promote their upcoming marathi serial ‘Vartul’.
All the wrestling matches in the upcoming 5 days are going to be played at Pune’s Shree Shiv Chhatrapati Kridapeeth also known as Mahalunge-Balewadi Stadium. For the enthusiasts who wish to watch the matches in the stadium, can buy tickets online via paytm and insider.in along with the counters at the venue.
* Unbeaten heroes of ZMKD
Players like Rahul Aaware, Utkarsh Kale, Lalita Sherawat, Vinod Kumar, Vijay Chaudhary are the unbeaten heroes so far at ZMKD. Amongst these, Lalita Sherawat, Vinod Kumar, Vijay Chaudhary won their consecutive 8th bout on Tuesday. All these talents risen from this platform eventually aspire to get ready for Olympic Games 2020 and earning a medal for the nation.
* Show must go on
Day by day the wrestling competition at ZMKD is getting fierce and so are the players. Tuesday was the day which saw more than couple of injuries. In the first three bouts from the Vidarbhache Wagh VS Mumbai Shastra, Hrushikesh Patil from 86+ weight group, Kumar Shelar from 74 weight group and Sonali Todkar from 55F weight group got severely injuried. Hrushikesh and Swati had knee problems while Kumar got hit in the eye. Hopefully with their show must go on attitude they shall recover soon. Even during Puneri Ustad VS Veer Marathwada, Aniket Khopde suffered a major blow. Hope and prayers for all these champions to get well soon and come back with greater strengths.